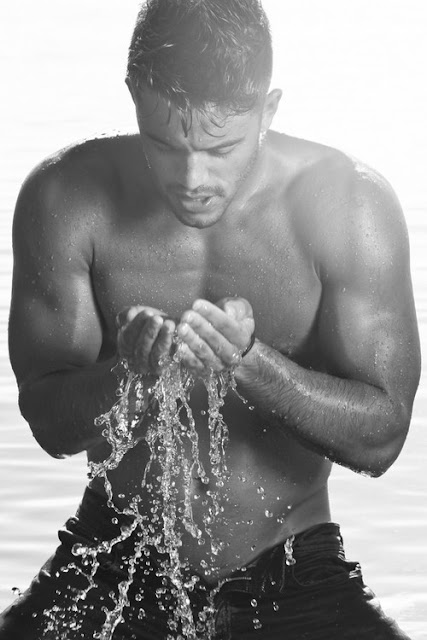 This moment of playful introspection is beautifully captured. It's like a memory of innocent boyhood exploration when the world was full of new wonders. The black and white toning amplifies this retrospective feel. It also helps to delineate beautifully the droplets of water cascading from the model's hands. They almost look like precious jewels scooped from a newly-opened pirate's treasure chest, boyish fantasies......

.....and yet the model with his muscular arms, artfully trimmed facial hair and partly unzipped jeans is very grown up indeed. You can almost see his dismay as the elusive treasures of youth slip though his fingers once again.

The image is beautifully constructed too. The broken streams of water open out in a pyramid shape as they fall, echoing the outer curves of the model's legs and his forearms. These curves lead the eye up towards the cupped hands like the shapely stem of a modernistic goblet, capturing the upwards scooping motion. Above the hands there's another family of curves, this time cup-like and including the models hairline, his chin, outer pecs and the hands themselves, all fitting inside each other like Russian dolls and conveying his intense focus on the contents of his scooping hands.

Accident, design or instinct?  Hay Torres is the photographer and deserves credit for a fascinating image.
See more here
Posted by Mitchell at 00:37 0 comments