I've always found the wide, round collars of astronaut outfits rather sexy, highlighting as they do the neck curves and short hair of these modern day adventurers. Gabo dresses his make-believe voyager in the reverse combination - helmet, gloves and very little else! These two viewpoints in their different ways both express the contrast between the protective, cloaking qualities of the uniform and the vulnerability of the man inside when operating in deep space.

If you like men you probably find the inaccessibility of the helmet a bit off-putting and it reminds me rather uncomfortably of that Star Trek scene in 'The Wrath Of Khan' where it becomes an improvised cage that the spaceman's head has to share with an eel-like parasite which tunnels into his ear and takes control of his brain. Ugh!

At the other extreme, this style of minimalised dress is typically used by strippers to theme their performances with an iconic, macho identity such as a cop, soldier or workman, using trademark garb that can be kept on as the disrobement proceeds. I can't say I've ever seen an astronaut stripper though. This technique also used to be a titillating feature of underwear advertising in the days when the sight of men in their underpants was slightly shocking (actually it still is in real life, but the media is a world all it's own that makes little effort to reflect the lives of real people these days)

Gabo is an artist who specialises in fan art, recasting male models as idealised images and dressing them up as though they were dolls like Action Men, GI Joes or Barbie's Ken. I like his clean, crisp style which keeps the images in respectable territory. The real life model upon whom this image is based is the oddly named Ardilla Genocida. There's more examples of Gabo Art at my blog for adults. 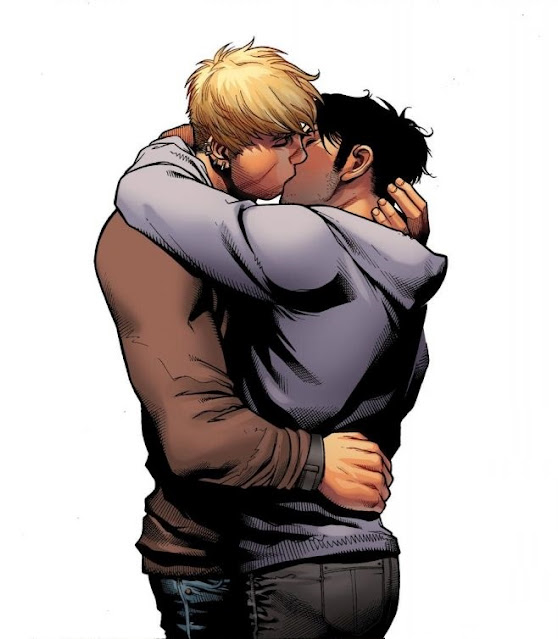 I don't know the name of this artist but I love his tasteful image which expresses Gay Pride more eloquently than any amount of flag waving or stripping off. Two men express their attraction to each other without any inhibition or guilt. Their street clothing paints them as ordinary guys and seems to imply that this is happening in a place where they might be seen. They are not practising their sexual preference hidden away 'in private' as UK law used to demand of gays in the bad old days. The blond character's scar and ear piercings indicate he's not a softie, nor a pussy, either, but a man who stands up for himself. His partner's dishevelled hair and stubble seems to suggest he's a bit of a scamp too.
It's all marvellously positive.
The style of this image is what you might call 'comic book realism' and the technique is that of an accomplished draughtsman, blending in well-observed details like the creases in the jeans with clever effects, like the highlighting of the 'blue' arm which almost seems like a glowing ring binding the two men together and protecting them in their moment of mutual obsession and love.
Posted by Models at 21:36 1 comments