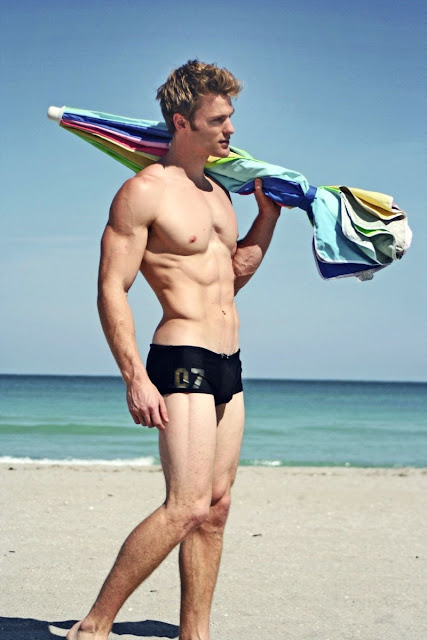 If this picture of Allen Clippinger strolling on the beach with a parasol seems familiar to you,
click on this reminder and you'll know why.

Hong Tao's recreation of the subject copies the photograph fairly closely, but he seems to have swapped the hint of boyish mischief seen here in the model's face for a more serious and sensitive demeanour. He focuses our attention on the model's character (and subtly changes our perceptions of it) by removing the distracting background of sea and beach, with all it's associations with summer, play and fun. Comparing the two pictures gives a rather good illustration of how we are subconsciously influenced by what appears to be minor detail.

The disappearance of the sporty numbers on the swimming trunks is also part of that transformation though I must say I like to see numbers on a man, it suggests he's got some energy and offers the faint chance that he might be capable of submitting to discipline.