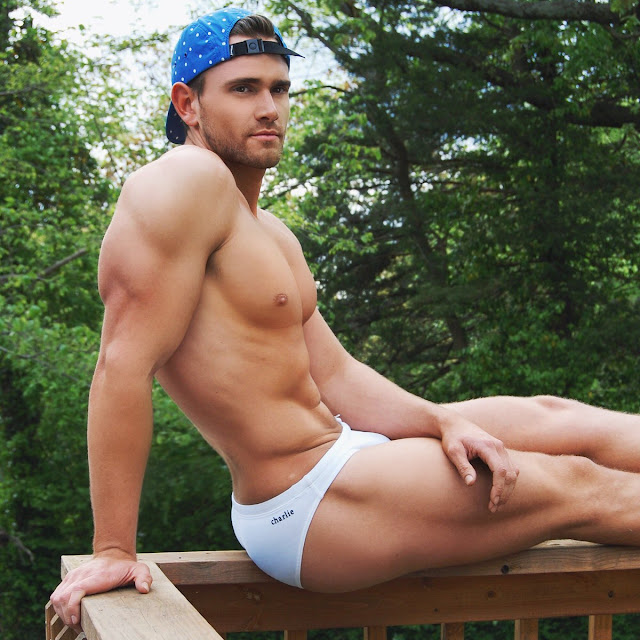 This picture of Keegan Whicker sums up much that I admire in a man.

A cute face and nicely muscled physique naturally but his spectacular thighs that make a pair of simple, white briefs look like the sexiest garment ever invented.

His stubbled jaw and reversed cap add a touch of casual, youthful individuality.

If you're looking at Christmas present ideas, he'll do for me! 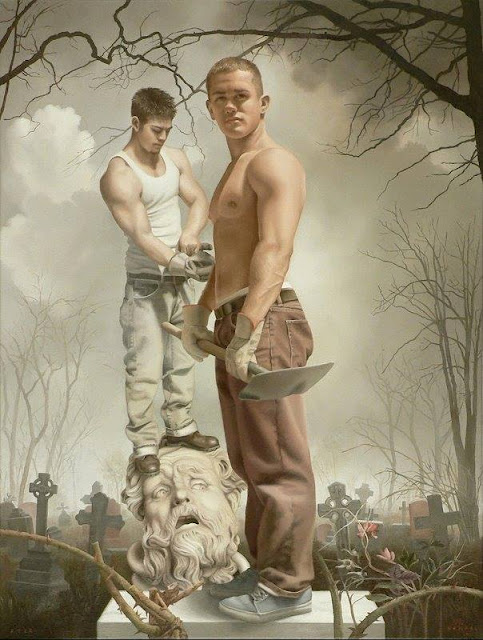 Commercialised Halloween isn't for me but this marvelous image by Wes Hemple is a nicely gay imagining of the truely spooky element of All Souls Day, with two young men digging in a murky graveyard and apparently unconcerned about what might be stirring beneath their feet. A silent head from a statue seems to be warning them. 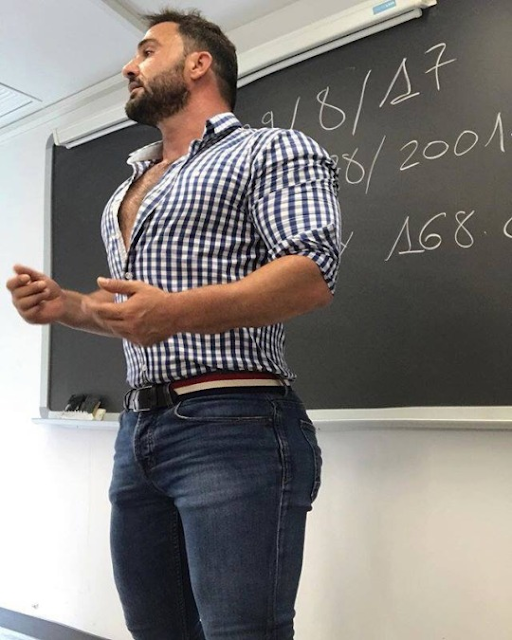 What do we want to talk about today, class? 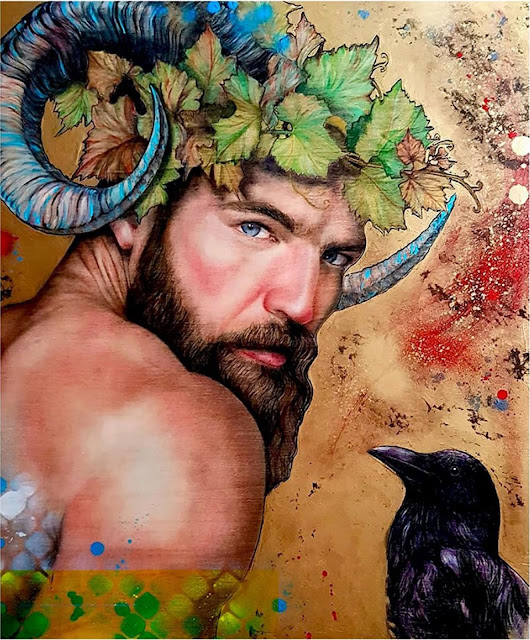 These pictures by Javier Sempere mark nicely the passing of the seasons in the Northern Hemisphere with the sensual heat of summer (below) giving way to the fruitfulness of autumn when Bacchus takes over from Helios the role of stimulating the pleasures of men. 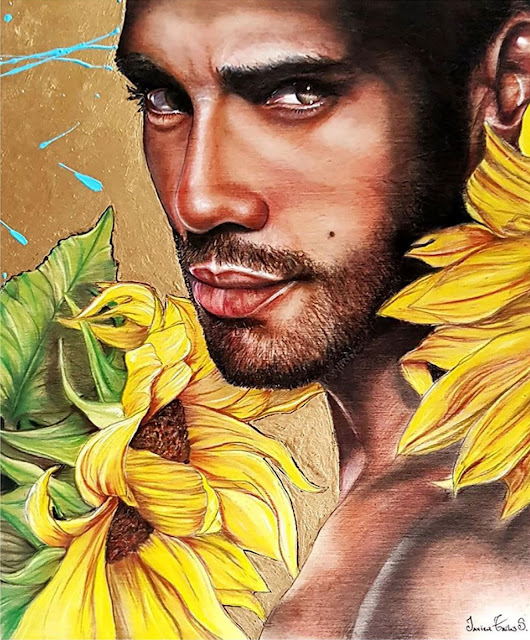 Email ThisBlogThis!Share to TwitterShare to FacebookShare to Pinterest
Labels: Art, faces, The Seasons 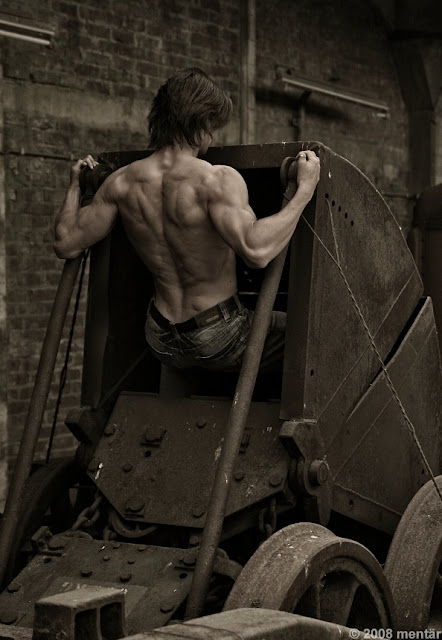 Men at work, stripped to the waist in industrial settings make for great imagery.

Machines and muscles are also a fascinating combination.

This image by Mentar treats us to a model with a superb muscular back, but adds an unexpected fantastical narrative as he appears to be about to be swallowed up by the maw of this strange monster

Two portraits of military men from a British artist I hadn't known about before.

They capture the masculine charm of soldiers and sailors rather well.

These images came from Uniformes et Stereotypes blog which is a fantastic resource of retro imagery regarding all branches of the military and also discussions of the work and inspirations of some important, vintage gay artists.

These images also complement the ongoing series at mitchmen blog featuring the imagery of the vintage, British 'Royale Studio' from the 1950/60's. Royale Studio was founded by Basil Clavering as beefcake photographic studio, but they also produced 'storyettes', which were photo series which often featured military scenarios of sailors and soldiers getting into tight clothes and mischief. The actors were often, reputedly, serving members of the British armed forces. As an adjunct to that series I am publishing, bit by bit, my entire collection of Royale images collected from the internet over the years to form an open archive. Two more 'new' Royale images turned up this week in my browsing.

Way above it all

This muscular image derives from the famous 'lunch on a skyscraper' photo of the 30's but it shows not ordinary men but two Superheroes Daredevil and Luke Cage, commiserating about their office politics.

It's actually much more interesting if seen as Daredevil using his special powers and spare time to grab an impromptu, romantic lunch with his construction worker buddy.

The artistic style is rather spidery, so I suppose the jokey, Spiderman lunch box beside is a rather apt addition. The colouring too is relatively austere for a Comic cover.

mitchmen has a thing about patterned briefs and swimwear (click on the label below for more examples). There's something showy about them which suggests the wearer has an interesting character and sweaty, hairy DW Chase is certainly not your average, plastic, fashion model. The decorations on these trunks often contrive to flatter the male figure, I'm not sure whether this one does or not!

The moment in which military comradeship turns into affection and love is beautifully captured in this image rendered by xth13teenx. It's part of a grand series which imagines Chris Redfield, the legendary character from the 'Resident Evil' games franchise, falling in love with his colleague Piers Nivans and setting up home with him. Their romance is charted through all the mundane things couples do together and their loving intimacies and it's all set against the context of the dangerous tasks they are sent on and the demanding physical training it involves.

This Art which portrays a relationship between two strong, gay men as complete, joyous and life-enhancing is refreshing and very, very welcome.

By way of contrast, Steve Walker's art which I featured at mitchmen last year, though pretty and romantic, always seems to have an undercurrent of loneliness and doubt.

There's a large gallery of work by xth13teenx at Deviant Art

Summer seems a long way off in the Northern Hemisphere but where these Aussiebum swimming trunks come from, it is the height of the season. Laces on swimming trunks had a serious purpose in the old days when trunks were made of natural fibres that sucked up water and created a drag that could unclothe the unwary. Low waisted designs are still vulnerable, lacking body curves for waistbands to cling to. In general though these days laces are more decorative in nature, but allowing them to dangle risks the same thing happening if a mischief-maker takes a fancy to grabbing them. Cavin here seems to be grappling with a stray hand of his own although I hear he's not averse to letting them drop in the right situation.