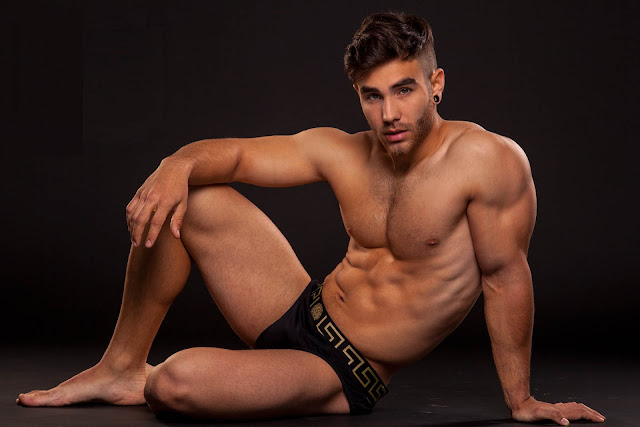 
In the present situation, I just felt like posting a picture I like
to show that some things are still enjoyable exactly as normal.
I love the 'grow-back ' on this man's chest! (click to expand!)
Posted by Models at 07:55 0 comments

It gets boring on long voyages, a sailor getting some exercise and body building in.

By the Russian artist Boimon (Boim) Solomon Samsonovich (1899-1978)
The title is puzzling, is this a Navy Champion showing off to his shipmates
or an informal contest to be Champion of the Ship?

A nice picture at first sight, but it's actually rather flat and puzzling on closer inspection. His crew-mates look on with interest but are noticeably separated and detached. Two men are stripped to the waist but the rendering of their bodies is scrupulously proper and vague. Compare with Animal Strength which is similarly distantly observed, but infuses much more masculine interest in the half stripped figure. You get the feeling the artist in 'Champion' is trying to say something but cannot bring himself to articulate it. The pose of the seated figure, perhaps, hints at greater interest and deeper 'emotions'.

This artist's painting often have a strong nautical flavour, but are usually more panoramic in style than this one, somewhat in the vein of Dutch Marine paintings showing general activity on the water. There is another somewhat like this, however, seen below.

'Telnyashka' is the Russian name for the undershirt this rating is washing on the deck.
It's a similarly tantalising image from a gay point of view.

Samsonovich had a distinguished career in the Soviet Art Establishment producing numerous images in the prescribed style of the regime showing ordinary people and heroic military types (see Boimon (Boim) Solomon Samsonovich). However in early 1953 Stalin died and the regime changed. These two images immediately follow that momentous event and one might suppose that there's an inkling of liberation in these pictures. The commentary at the link above gives no clue to this but if you check the other paintings shown there you will see another powerful interest running through his work which I'm not going to specify here but which seem to warrant comparison with Scott-Tuke.
Posted by Models at 08:46 0 comments